Why DH writings are dense

I have seen in many videos and reviews people complain that GEB and other Douglas Hofstadter(DH)’s books are very dense, he takes infinite time to explain something. In this blog, I wish to explain a sophisticated argument on why DH’s writings are dense, and why I feel they should be. Of course, a simple explanation can be made that he tries explaining the example in great detail so that less informed people also understand. Another explanation can be that the more time the reader spends with the idea, it is stored in reader’s long term memory. But here, I wish to use one of the ideas from the GEB and explain the same. For me this is one of the most beautiful ideas present in GEB and it really gives a good framework when you want to deal with “complicated” things or you planning to explain a complicated thing to someone. Here by “complicated” I mean something very specific. I called something, say X complicated if explanation of X involves different steps and each step further might involve complicated things.

Suppose, there is an idea or concept, which can be further broken down into modules, which are smaller ideas or concepts, then we can call such each module as symbols. For example, if you consider the question why things fall, the answer would be gravity. But what is gravity? Gravity is a force due to large mass of Earth, which pulls object downwards. What is Force? - Force is the cause for changing the states of body between rest and motion. What is Earth? - Earth is a planet on which we humans live. [0]

Another example, say you are learning Taekwondo(or any other martial art). The first time you are taught front kick is this way - Stand in a position with one foot facing forward, position your arms, lift your back knee, point your knee towards your target, strike your target, put your foot back. To a beginner in martial the symbols would be something like this in his/her mind. 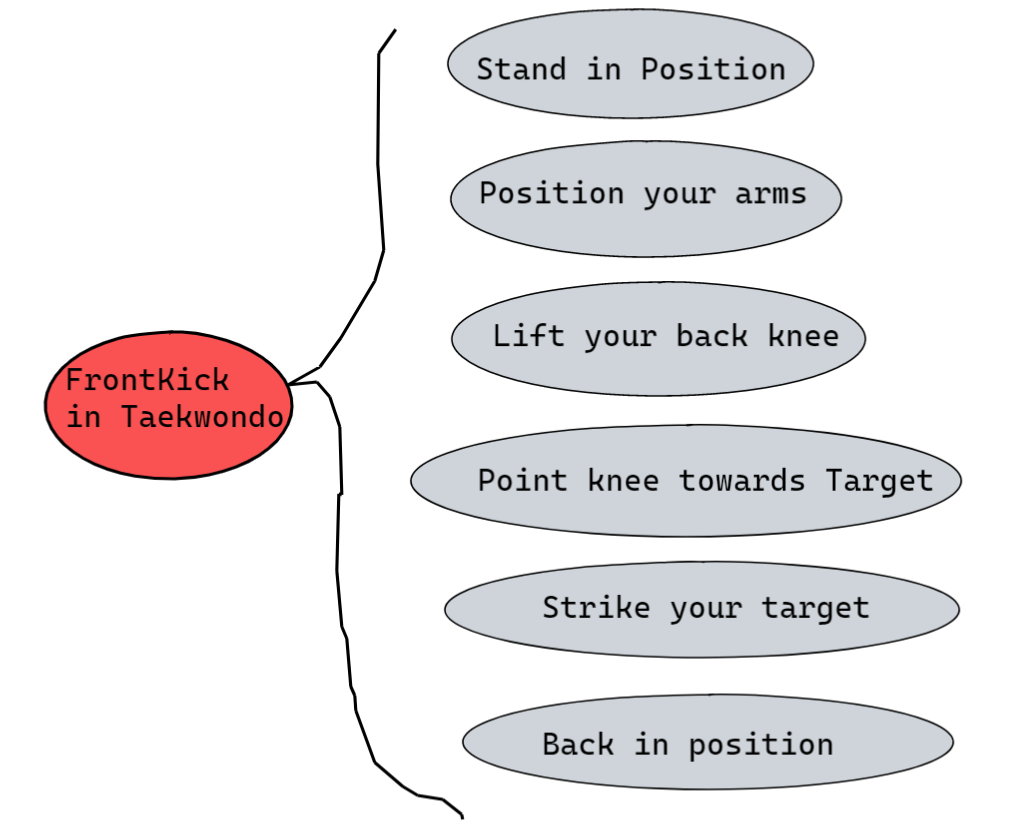 To summarize, any thought or concept in human mind exists as symbol which is linked with other symbols

But when you don’t want to hold a object, do you consciously think of the fact that you are leaving on a planet, and due to the the large mass of the planet, it has tendency to pull objects down, hence if I leave the object in air, it will not float, rather it might fall, hence I have to place it on a surface, which can hold it. No, right! You just have it in mind, as single concept - gravity. In fact, this same gravity is further used to explain more complex phenomenon like Planets revolving around the sun.

In conclusion, if you spend enough time with a anything , it becomes a single symbol. You don’t have to think of the other sub-concepts every time.

That is the same reason why DH spends a lot of time, with single concept - explaining the concept using simplest words in different ways, trying to give analogies, giving exercises to the reader so that the idea or concept is stuck as a single symbol in his brain. For example, consider Gödel’s theorem, there is a significant amount of time involved in explaining expressing number theory statements as TNT, in fact there are exercises given at the end of it too for the reader to practice. This translation is a important aspect of Godel’s theorem proof. Now, while explaining the proof, DH doesn’t have to explain translation steps there in detail, as a proper reader would have firm grasp of the concept. That is why DH could explain Gödel’s theorem in just 12 pages - 348 to 350.

Added to this advantage, since each concept in Gödel’s theorem proof is present as a symbol in reader’s mind. He could explain isomorphic concepts at other places too(like the typogenetics) in a simpler way and the reader could grasp with very little effort, despite having no background in biology or Mathematics.[1]

Suppose you want to explain a concept - “A”. Explanation of A first involves Step 1, which requires explaining another concept”A1”, similarly for Step 2 requires “A2”, and for the final step - Step 3 requires “A3”.

An approach would be to explain A1 strongly. By strongly explain, it means to spend enough time with the idea of A1[2] ,make sure that it is a single symbol in brain. Give it some catchy name so that it stays in audience head. Repeat the process with A2 and A3.

You can see that with this approach explaining A becomes so easy, because your thought process would be something like this

The advantage of the above process is that One will always have a big picture of A in mind, as A1 and A2 and A3 are just symbols which together help build A

As opposed to the above method, more conventional way would be to start your discussion with step 1, explain A1. Once you are done with A1, you start discussing step 2 explain A2 , and similarly with A3. But wait? Aren’t these 2 similar? The crucial thing, which is missing in the second method would be to establish A1, A2 and A3 are single independent symbols rather than learning A1, A2 and A3 as a side product of A. The added advantage of the former method is that, A1,A2 and A3 are reusable at other places, as now they are independent symbols. We can use them in a different complex scenarios. For example, if some other problem involves A2, it would be easy to solve it as the person has A2 as an independent symbol in his/her mind. But if someone had learnt “A” through the second method, he/she would have to recall that a similar things was done while learning “A”, and then go through each step of A, and relate things.

One crucial thing which I feel is missing in the first method is while explaining A1, A2 and A3 one has to provide the learner a motivation to why they are learning A1, A2 and A3. In second method it is apparent, as A1, A2 and A3 occur in a logical sequence. It is here that the presenter’s skills come into play, the presenter might chose to teach it as an exciting idea or before hand reveal the spoiler that Step 2 will be used in A. A good presenter has to have a combination of both.

[0] - It is all wrong. Gravity is geometry not a force as per General Relativity, which reveals the true nature of Universe. However Newtonian analogy still holds well for most of the cases.

[1] - Here I tried to embed the idea of symbols as a single symbol using at least 2 examples - gravity and Front kick in Taekwondo.

[2] - If you presenting A1 in a lecture, then ideally it is better if it is explained within a time period of a microcentury.

[3] - If you have read the book Peak, by Anders Ericsson, he mentions that the main difference between experts and beginners is due to mental representations. And one can develop their mental representations by inculcating deliberate practice. I feel that these 2 ideas are closely related, with enough deliberate practice, complicated ideas act as a single symbol in an expert’s mind.